Benedict Pascal is a playable character in Triangle Strategy. He is a member of the House Wolffort War Council.

Benedict was a bannerman of Symon Wolffort during the Saltiron War. Benedict was a feisty soldier, always eager to jump into battles and make a name for himself. His comrade, Erador Ballentine, often butted heads with him over tactical matters. Despite the two having opposing personalities, Erador and Benedict were still close friends, and protected one another with their lives.

Over time, Benedict became an invaluable strategist to House Wolffort. His rashness from his early years had faded away, and he was now Symon's level-headed right hand man. When Destra Wolffort dies, Benedict takes it upon himself to visit her grave frequently and adorn it with Snowbell Blossoms. He swears to protect Serenoa Wolffort with his life, and to give the young lord immeasurable power.

Benedict has been the steward of House Wolffort since the Saltiron War. He has the absolute trust of his liege, and has overcome countless difficulties with his intelligence and level-headed judgement. Benedict is first seen in Chapter I: A Young Hawk Soars reigning in an estatic Serenoa concerning Serenoa's marriage to Frederica Aesfrost. Because of Benedict's forethought, Serenoa is able to save the arriving Frederica from bandit duo Trish and Travis.

After Serenoa Wolffort becomes head of House Wolffort in Chapter II: To Arms, Brave Warriors, Benedict follows wherever Serenoa's convictions lead him, and uses his strategical wisdom to help the young lord. One such strategy involved faking Prince Roland's death in Chapter IX, Part I: Dwindling Light, in order to divert Aesfrosti attention away from House Wolffort.

Once Serenoa helps Roland retake the capitol and Glenbrook begins to rebuild, Benedict was concerned over the state of of health Symon was in and wanted to visit him to bring him up to speed. Should Serenoa travel alongside Benedict for the journey, Benedict see Serenoa's actions have made him a worthy contender for the crown as a salt shipment was given to the Wolffort Demense and he was considerably more popular than Roland.

Going to pay his respects to Destra, he feels that Serenoa has proven more than capable to lead and tells Serenoa his plan to retire from his position after Symon's feast to serve as Symon's caretaker as Serenoa attempts to sway Benedict to stay as his advisor even though Benedict felt he had done all he could for Serenoa and planned for Anna to take over his duties. At the banquet, Patriette makes his move against Lord Symon and Serenoa as one of the royalists lands a grievous blow on Symon as the Royalists attempt to kill the Wolfforts. Benedict, Symon, Erador and Serenoa fight together one last time to put down the Royalist assassination attempt but Symon succumb from his wounds and exertion. Before he dies, Benedict and Symon tells Serenoa the truth that he was actually Lord Regna's son and thus first in line for the throne but because of Destra's commoner status and was instructed by Benedict to protect Serenoa at all costs. Benedict then learns that the Royalists wanted to keep Roland as a puppet ruler and wanted to make sure the official story was Symon died of illness rather than by assassination. With both Destra and Symon dead, Benedict became more determined than ever to see Serenoa succeeds, even if at the cost of happiness of either Serenoa's peers, Frederica or Roland who also now contend with their own revelations.

Benedict arrives at the harbor to speak with Serenoa personally. He tells Serenoa that Symon was murdered and that Patriatte planned the assassination to get rid the Wolfforts and told Serenoa to hide the reason behind Symon's death as illness. He reveals the truth of Serenoa's birth and how he kept the secret with Symon and give him the signet ring to prove his birthright. Serenoa knowing he could not betray Roland during such a difficult time wanted to keep the secret safe for the time being.

In Chapter Chapter XVI: Sleep, My Friend, Benedict and the rest of House Wolffort uncover salt crystals in the Grand Norzelian Mines. As the first ever non-Hyzantian source of salt in Norzelia, what Serenoa Wolffort and his war council choose to do with the crystals could shape the future of the entire continent.

Benedict's plan is to negotiate an alliance with the Grand Duchy of Aesfrost, defeat the Holy State of Hyzante with Aesfrost's Deathsknell, then distribute the salt crystals fairly across Norzelia. A possible consequence of Benedict's plan that he hopes for is that Serenoa Wolffort usurps the throne from Roland Glenbrook.

Serenoa assents to Frederica’s strategy, and formulates a plan to go along with it. He decides House Wolffort will offer refuse to offer the salt crystals to Hyzante as a diversion, sneak into Hyzante to liberate the Roselle, and then sail off for Centralia. Benedict, believing Centralia to be naught but an irresponsible fairytale, refuses to accept Frederica’s plan. He furiously duels Serenoa for his irresponsibility and was beaten, but ultimately stays behind in House Wolffort to watch over the demesne while Frederica and Serenoa set their plan into motion. With no way to defend the demense, he takes the subjects of Wolffort and Glenbrook to Aesfrost to shelter them from the wraith of Hyzante's armies, unaware of Serenoa's final fate as he sacrificed his life to stop Idore.

In the epilouge, Hyzante is plunged into civil war by the Rosellan uprising, and Exharme has taken House Wolffort. Benedict is seen serving as a strategist for Aesfrost, and cooperates with Gustadolph Aesfrost. He hopes to one day reclaim the Wolffort demesne and achieve ownership of the land even long after the Wolffort line was extinguished and the sons of Regna disappeared to parts unknown.

Serenoa assents to Roland’s strategy, and formulates a plan to go along with it. He decides House Wolffort will offer the salt crystals and Glenbrook to Hyzante, then unite with Hyzante for a full frontal assault against Aesfrost. Although Frederica leaves, House Wolffort is able to conquer Aesfrost with the might of Hyzante and Glenbrook at their backs. Serenoa is appointed as the consul of Glenbrook, and Roland as the Minister of Salt.

In the epilouge, Benedict is not mentioned, although it can be assumed he continues to dutifully serve Serenoa, happy that Wolffort set the foundation of an everlasting peace between the nations.

Serenoa assents to Benedict’s strategy and devises a plan alongside him. Serenoa and Benedict decide to first negotiate an alliance with Aesfrost, then utilize Aesfrost’s Deathsknell to breach the goddess’ shield and charge into Hyzante. Although Roland leaves the party in rage, Benedict uses this opportunity to have Serenoa ascend Glenbrook's throne. King Serenoa holds a metting with Archduke Gustadolph Aesfrost, which ends with the archduke being humbled and agreeing to help conquer Hyzante. Benedict devises a strategy to draw out Hyzante's main force while Gustadolph aims the Deathsknell at the Goddess' Shield. First, Benedict cuts off trade with the Norzelia Consortium. Next, he sends a copy of incriminating evidence to Minister Tenebris Mistel and threatens to expose the minister to the hierophant. Lastly, he forges a letter using Roland Glenbrook's name and royal stamp, saying that the dethroned king will help Tenebris destroy House Wolffort by bringing reinforcements the battle against House Wolffort. When the day to conquer Hyzante arrives, all of Benedict's pieces begin to fall into place. Tenebris sends consortium merchant Clarus Brokker out onto the battlefield as a commander and sends the bulk of Hyzante's forces with him. When Clarus' forces are easily felled by House Wolffort and it becomes clear that the letter from Prince Roland was forged, Tenebris reports the situation to Minister Idore Delmira. Exharme Marcial is sent out in the meanwhile to deal with House Wolffort.

With Serenoa as Glenbrook's king and Hyzante put down, Benedict visits Destra's and Symon's graves one last time for his role in manipulating Serenoa to avenge Destra's failure to become queen of Glenbrook because of her station in life. He attempts to commit suicide, before Serenoa snaps Benedict out of his stupor ask him to remain as his advisor despite his crimes.

In the epilogue, Benedict serves as the steadfast advisor to King Serenoa. He explains that while Roselle will be freed, no substantial aid will be given to the Roselle nor people left poverty by Glenbrook's newly implemented meritocracy. Although Serenoa and Benedict have much work to do to stabilize Glenbrook's government, Benedict continues to serve his king with all his might.

Serenoa considers all three strategies laid before him, and deems them all to have dreadful downsides. After careful consideration, he formulates a strategy where the salt crystals would not be relinquished to any one nation, nor abandoned altogether. Serenoa splits his allies into three regiments.

Benedict’s regiment drives Exharme Marcial away from House Wolffort, utilizing their knowledge of the terrain and tactical prowess.

Benedict is seen rallying the forces Serenoa had ordered to protect the Wolffort Demense as Roland and Frederica complete their tasks at hand. As Exharme's forces gathered around the demense seeking to intimidate the forces to surrender. Benedict remains stalwart and refuse to give in to Exharme's demands unlike the previous encounters. Despite Exharme's overwhelming show of force, Benedict hands Exharme his first taste of actual defeat as the Hyzante army was routed with or without the aid of the wildfire.

Frederica’s regiment heads for the Source and incites a Rosellan uprising, killing minister Kamsell Pharant in the process. Minister Tenebris Mistel is also implied to die in the ensuing Rosellan chaos.

The three regiments converge outside of Hyzante, and kill minister Exharme Marcial while Svarog readies the Deathsknell. After the Deathsknell breaches the goddess’ shield, House Wolffort charges into the Holy State, defeating minister Lyla Viscraft in the process. Although Minister Lyla begs for death, House Wolffort spares her, explaining she has a chance to atone for her inhumane research by releasing the truth to the world. With 5 ministers dealt with, House Wolffort marches into the Hierophant’s Palace to face off against the final two Hyzantian leaders: Idore Delmira and The Hierophant. When the party looks into the hierophant's chamber, they are shocked to discover the hierophant is naught but an automaton controlled by Idore. Absorbing the power of Aelfric, Idore and his mechanical hierophant face off against Serenoa in one last clash of convictions. House Wolffort is triumphant, freeing not only Norzelia but the Roselle once and for all.

In the end, Roland Glenbrook remains king of Glenbrook, Svarog Aesfrost becomes archduke of Aesfrost, and Lyla Viscraft serves as the head of Hyzante. The three dignitaries all convene for the momentous wedding of Serenoa Wolffort and Frederica Aesfrost and toast to a brighter future for all of Norzelia. As Serenoa and Frederica marry, Benedict looks upon his young lord happily, knowing that Serenoa has forged that respects Symon's wishes. 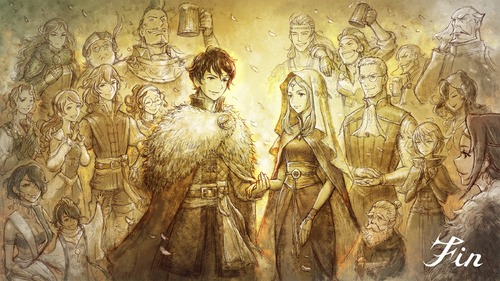 "This is the end of the spoilers in this section."

Chapter VIII, Part II: In the Eye of the Storm[]

Chapter XVIII, Part I: Of Fire and Blood[]

Final Chapter: The Bell Tolls for No One[]

Final Chapter: Dance of the Automaton[]

Community content is available under CC-BY-SA unless otherwise noted.
Advertisement